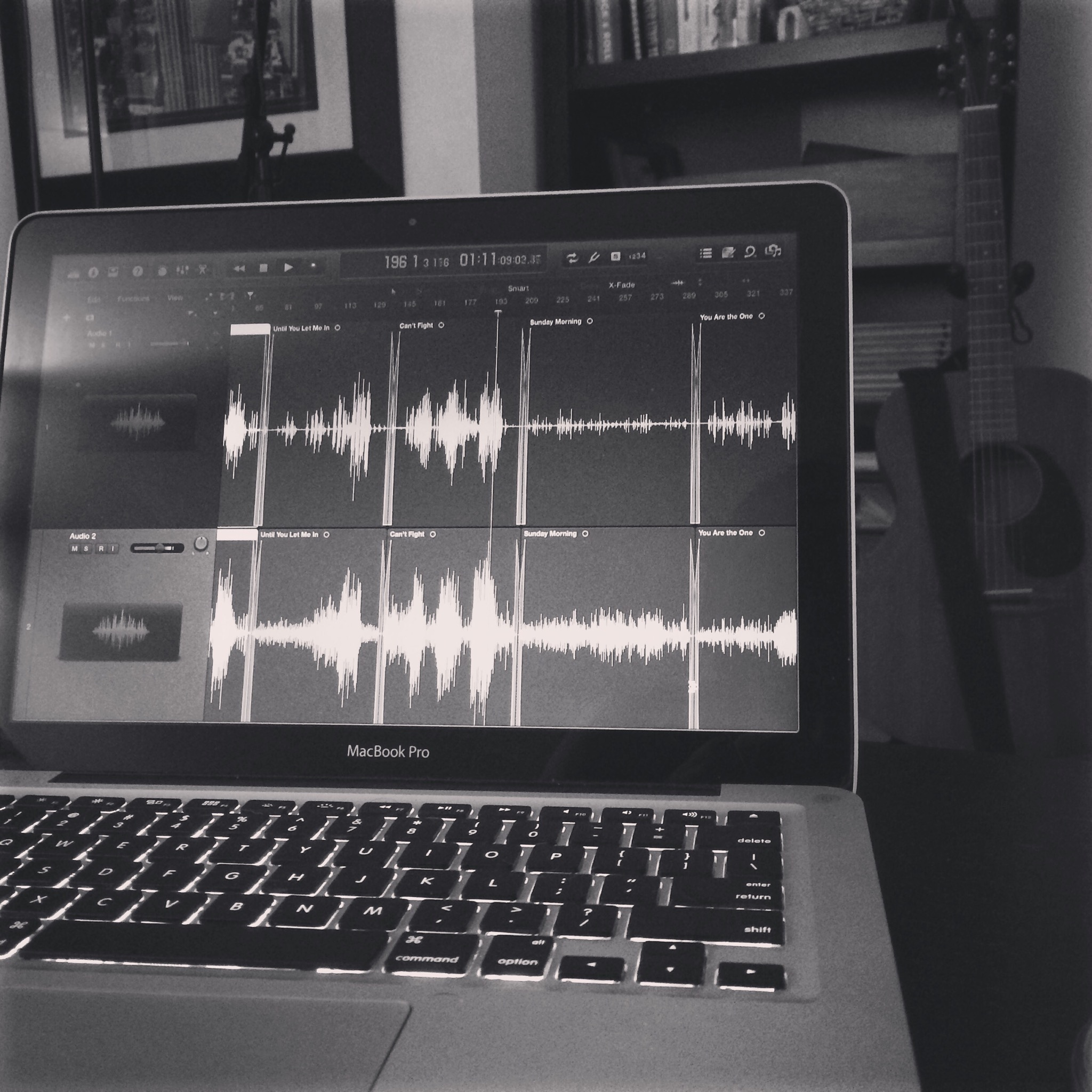 This year – for the third year in a row – I recorded my upcoming performance for the BlowUpRadio Spondylitis Benefit Webathon live from my apartment.

The process of recording this performance has evolved over the years. And I’ve learned a few things along the way.

The first year, I had just purchased a great little field microphone made by Zoom and thought this might be a perfect opportunity to try it. I didn’t give much thought to mic placement. I just placed it on a table. Then I sat in a chair and began singing/playing.

I was actually quite pleased with the sound of the mic. The only trick was getting the right acoustic balance between the voice and the guitar. The guitar was a bit too loud when I played with a pick. So I decided to strum with my fingers instead. That seemed to fix the issue.

My friend Joe Egan who runs Missile Silo Studios in NJ did some awesome post-processing work on the recording to clean up the EQ and boost the levels.

Overall, I was pleased with the result. I also released it as a live digital record.

I used the Zoom mic again, but this time I wanted to focus on two improvements.

To capture more energy in my performance, I decided to stand up while playing. It worked quite well, actually!

The second improvement was based on the fact that in Year 1, Joe had to do a bit of studio magic to bring out the frequencies that needed to be heard. So in Year 2, I wanted to capture a better overall signal directly from the source. To do this, I put the mic on a stand and worked on finding the right placement. I wound up putting it just below chest level and about a foot away from where I was playing. I angled it slightly upwards to capture more vocal. This helped achieve a better guitar/voice balance.

Again, I sent the recording to Joe. He actually commented about how much better it sounded right from the start. Yes!

I released this one as a live digital record, too.

Though I was happy with the results from the previous two years, I wanted to try and push things to the next level. This year, I wanted to make something that sounded closer to a studio recording. I still wanted to record each song as a live take – no overdubs, no edits. But I wanted more control over the balance of the guitar and voice. I wanted to be able to achieve better isolation so that each instrument would come through with more clarity and impact on the recording.

So this year, I relieved the Zoom of its duties and opted for a two-microphone approach. I wound up with the mics pictured here – an SM57 on the voice and a large diaphragm condenser mic on the guitar.

Arriving at this setup was actually a lot trickier than I imagined.

The result? The voice sounded good, but there was no isolation. The acoustic guitar was coming through the vocal mic loud and clear. I wasn’t achieving my goal.

Then I thought of a story about Bono, of all people.

I had heard that Bono would sing through an SM58 mic in the studio. These are mic’s that vocalists use during live shows, but not so often in the studio. The mic works nicely during a live concert because it actually ignores most of the sound around it. It only pays attention to the sound directly in front of it.

Bono liked to use this mic in the studio because it meant he didn’t have to wear headphones. The engineers could emulate the feeling of being in a live concert by playing the instrument tracks over the studio speakers. Then Bono would sing his vocal takes from inside the control room with the music playing around him. Just like he was at a live show. This would’ve been an impossible recording situation had he been trying to use a large condenser mic for his vocal, as many engineers do.

By using the SM58, Bono was able to harness the energy of a live performance. Plus, the producers had enough isolation on the vocal track to do all the post processing and mixing to produce a great sounding studio album. And after listening to U2’s Joshua Tree, can you really argue with the result? Bono sings his heart out and it sounds great.

Thinking about this story made me realize something. My problem – too much sound from the guitar being captured by the vocal mic – was the same problem that U2’s engineers solved when they handed Bono an SM58. The mic captured only the sound that was directly in front of it, Bono’s voice.

This gave me an idea. I own a SM57. It’s practically the same mic as the SM58 (just add a pop filter!). So I thought, Why not try the SM57 mic on the vocal? I still really liked the idea of using the large condenser mic in some way, so I put that mic on the guitar instead of the voice. I angled it just slightly downward so that it didn’t pick up too much of the vocal.

Bingo. The mic swap made all the difference! The SM57 did its job. It ignored the guitar and captured my voice nicely. The large condenser mic sounded really nice on the guitar, too. It filled up the rest of the space in the recording with a good balance of low, middle, and high end.

Once again, I sent the raw tracks off to Joe for mixing and level-boosting at his awesome studio, Missile Silo Studios. I’m so excited about the result. It’s the best-sounding one yet!

You can hear the finished recording when it airs this weekend as part of blowupradio.com’s Spondylitis Benefit Webathon.

Hope you are able to tune in!