I’m excited to be back at Espresso Joe’s on Saturday. This time, I’m part of a Guitar Pull hosted by Lazlo. This is the 19th Anniversary of blowupradio.com and it will be great to share the stage with Jaime Rose and Keith Peters. The format of the Guitar Pull is engaging – we take turns playing songs, talking about them, and answering questions from Lazlo. I hope you can join us!

In case you missed it, you can now stream my live performance from the Banding Together webathon that took place a few weeks ago. Check it out over at SoundCloud here or using the embedded player below. 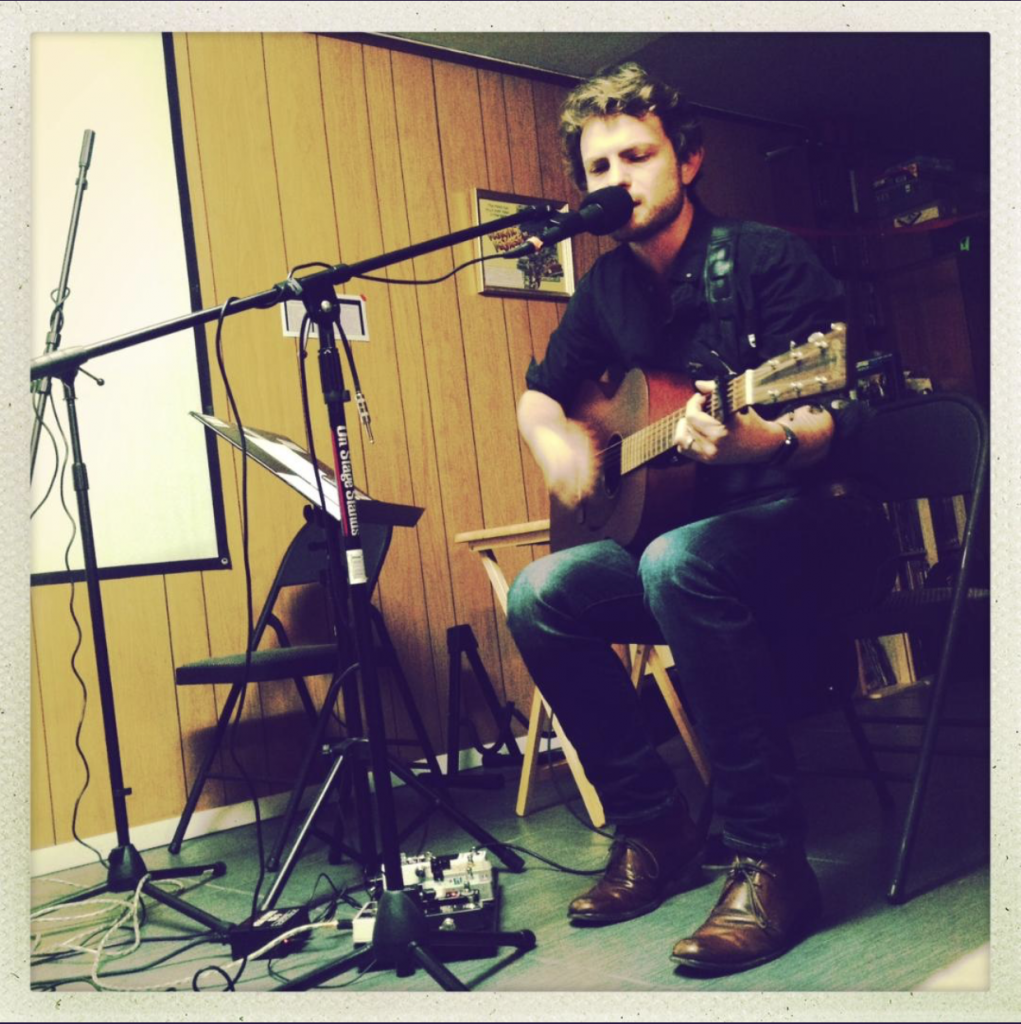 Check it out in the embedded player below, or listen directly on SoundCloud here: https://soundcloud.com/joshbicknell/josh-bicknell-live-2018-banding-together-webathon-for-spondylitis-association-of-america

Back in 2013, Christina Alessi, Jonathan Andrew, and I decided to play a show together at Northern Soul in Hoboken, NJ (photo above). The idea was to collaborate on each other’s music. We each wrote our own songs, but thought it would be fun to back each other up as we traded the lead spot. Little did we know this would be start of the band we play in now – Christina Alessi and the Toll Collectors!

On Saturday, we get to return to original form in a performance at Espresso Joe’s in Keyport, NJ. Jonathan, Christina, and I will perform as part of a Guitar Pull, hosted by BlowUpRadio.com. This will be a fun show and allow us all to play our songs individually, but with a little help from each other.

Also, it’s Lazlo’s birthday! He’s the mastermind behind blowupradio.comand we can’t wait to help him celebrate!

I have a brand new recording to share with you today! It’s a newly-recorded version of my song “Walking On,” featuring Ty Tuschen on electric guitar. It’s part of Banding Together 2016, a compilation album to benefit the Spondylitis Association Of America. All proceeds will go to fund research and provide programs and services for people suffering from Spondylitis, a genetic rheumatoid arthritic condition that causes inflammation and fusion in the vertebrae of the spine, affecting more than 2.7 million adults in the United States. 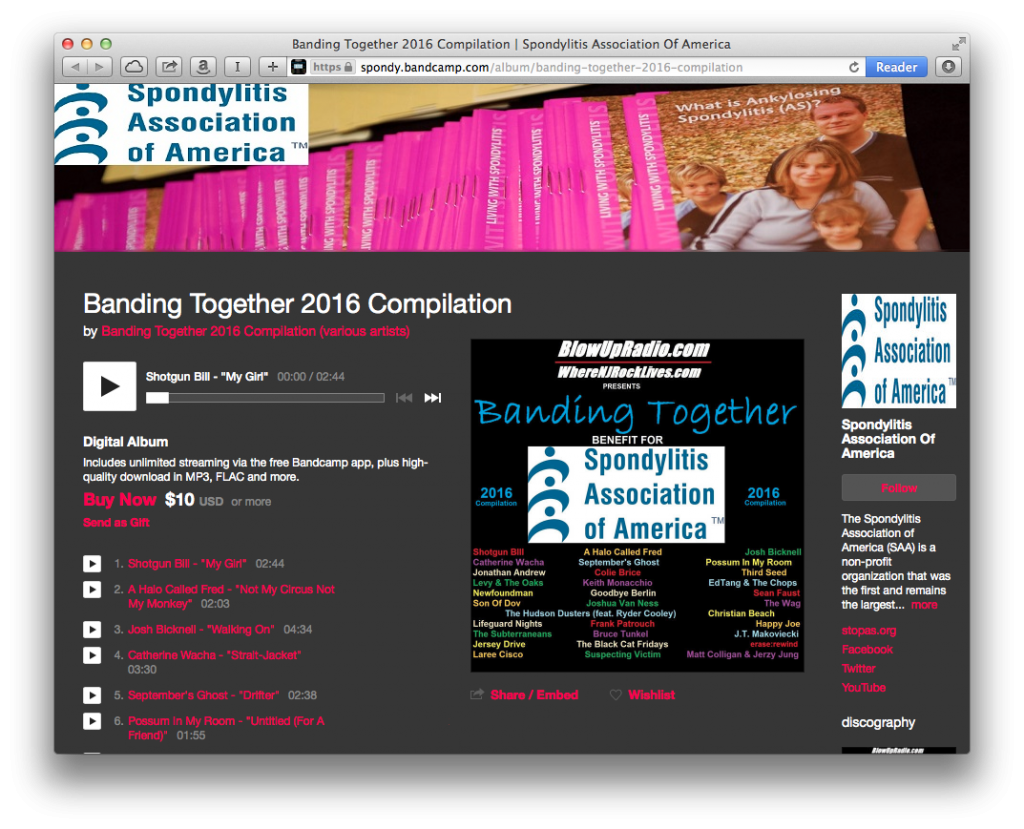 Thank you so much for supporting this cause!

What a great night of music at Espresso Joe’s! Lazlo’s Guitar Pulls are always unique. This time, he brought together Jason Kundrath, Paul Rosevear, and me. We played our songs in round robin style, trading stories and memories as we went.

There was a spirit of camaraderie and even a spontaneous collaboration! Paul Rosevear joined me during my song “Walking On” to add some electric guitar. Lola captured it on video… check it out! http://youtu.be/33yxO80_pYY

And finally, here was the setlist. 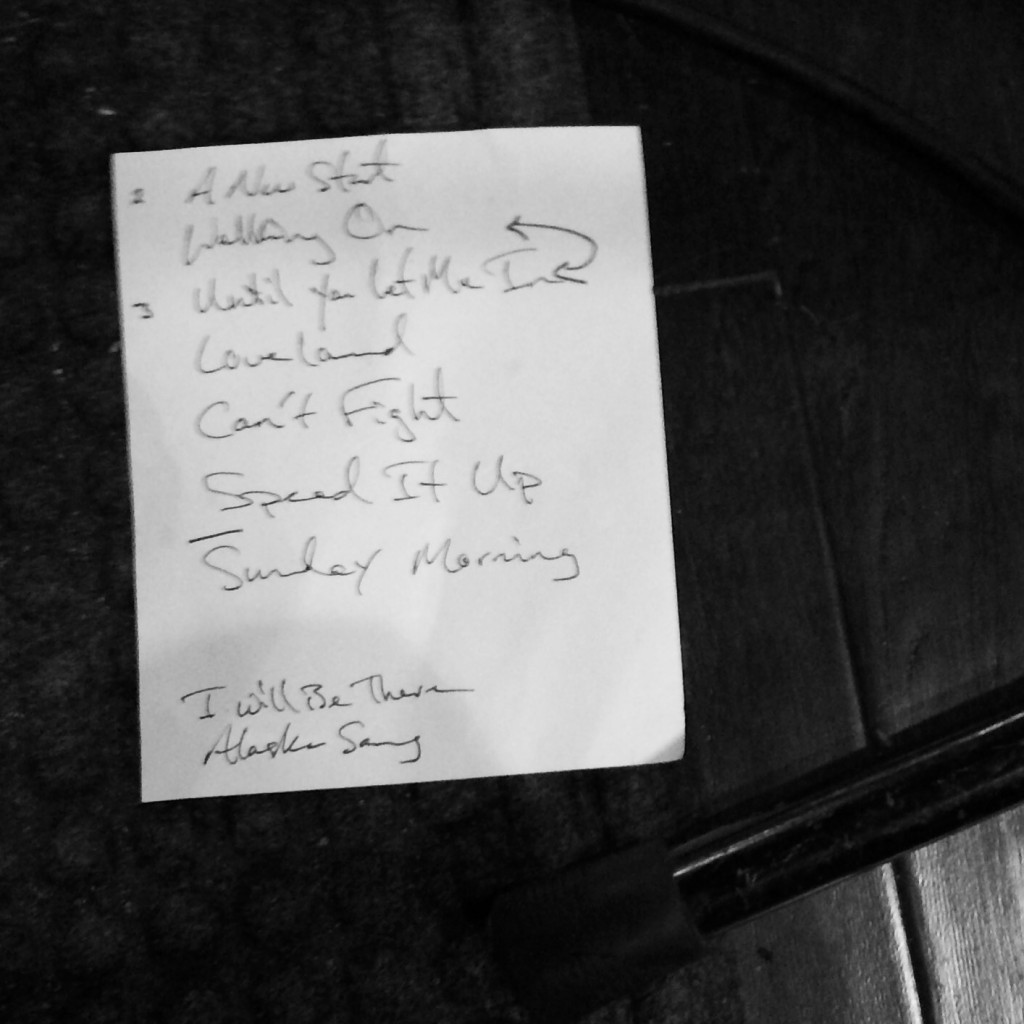 Last year, I wrote about the recording process for Banding Together 2014 and how it evolved from 2012-2014. In 2015, the process took another step forward. Here’s how.

In 2012, I put a stereo field mic on my dining room table, sat in a chair, and let it happen. In 2013, I learned a bit about mic placement and I stood up to get some more energy on the recording. In 2014, I abandoned the stereo field mic approach and instead used two mics. This gave me better control over the balance between the voice and guitar.

As I set up to record Banding Together 2015, I started with the same approach as 2014. And then at the last minute, just before hitting record, out of the corner of my eye, I saw that same stereo field mic I had used in 2012 and 2013. I had a thought!

Though I liked the sound of the 2014 recording, everything sounded “up close.” As the listener, I didn’t get the sense I was in the room. There was no ambience, no space, no room sound. So at the last minute, I grabbed the stereo mic, placed it on the other side of the room, and hit record. I didn’t expect to use it in the final recording at all, but I thought it would be a nice experiment. I had changed my approach each year since 2012. It just didn’t feel right to take the same exact approach.

Well… what was just an experiment turned into a revelation.

I was shock when, after having finished recording my performance, I dropped the stereo field mic’s audio into the mix. It made it sound so much bigger! There was a bit of space between the source of the sound and the mic. The room acted as a natural mixing board, blending the sounds of my acoustic guitar and my voice in a natural way. Combining this sound source with the close up sources made the overall recording sound fatter and larger. It sounded like you were there in the room with me. Which was exactly what I was going for!

Having that room sound alongside the closer mics on my voice and guitar really gave me the best of both worlds. I had the detail and presence I needed from the close ups and I also had the room and a sense of space from the room mic.

And of course, after all this, I made a connection I probably should’ve made from the beginning.

It’s a lot like recording drums! The close up mics are for the detail, but the drums don’t sound complete until you hear what they sound like in the room. The room is essential!

Just like anything you are trying to capture acoustically, the room can make all the difference.

P.S. If you’re interested in listening to the final recording, it’s available on iTunes, Spotify, and everywhere else. Check it out here.

My latest album – Banding Together 2015 – is a live album. Not live in the sense that it was recorded at a show or even in front of a live audience (other than my cats). It’s live in the sense that the performance is live. I played my guitar and sang each song from the beginning to the end. And that’s what you hear on the album.

But why do it live? Why not record to a click track and multi-track the guitar and vocal separately? Recording software makes it easy. Plus, it produces a nice “studio sound.”

In this particular case, live was a requirement. The Banding Together webathon had to be performed live because that was the nature of the event. But even if that requirement wasn’t there, would I have done it differently? Would I have multi-tracked?

I don’t think so. Not that I wouldn’t ever record that way, but there’s something special to me about being able to hear a singer/songwriter perform songs in the most intimate setting. I don’t believe you can truly capture that sound unless it’s recorded as a live performance.

When the performance is recorded live – even if it’s captured in a studio – it feels like you’re in the room with the musician. That’s what the early Bob Dylan records – like The Freewheeling Bob Dylan – make me feel. That’s what Damien Rice’s first record makes me feel. It’s the best part about stripped-down, live-performance recordings. They allow us to hear the music as written.

It’s the reason MTV’s Unplugged was so popular, right? We’re able to hear if the song stands on its own. We can focus on the melody, lyrics, chord changes, and intent of the songwriter. We’re not distracted by studio effects or instrumentation.

We want to feel the natural ebb and flow of the music as expressed through the dynamics of the performer. It’s not often we hear true dynamics in today’s recordings. The effect of dynamics is often achieved by adding or subtracting instruments, but rarely does the overall loudness change.

Yet if you’re listening to one person play in front of you live, the player’s dynamics come through so clearly. This is something I wanted to capture in Banding Together 2015. I want you to feel like I sat down on your couch and sang you my songs with all my heart.

I hope that feeling comes through when you listen to it.

Some good news. Some bad news.

Don’t worry. The webathon is re-airing through Friday evening, so there is still time to make your donation to the Spondylitis Association of America. Ankylosing spondylitis is a form of progressive arthritis due to chronic inflammation of the joints in the spine. It can be very painful to those who are affected by it.

P.S. If you missed the first airing of my set, you can listen to it again on Friday, October 23rd at 11am!

I’m happy to announce that I’ll be performing as part of Banding Together, a webathon to benefit the Spondylitis Association of America. October 16-19th.

This year marks my fourth year of playing this webathon as a solo acoustic artist.

This benefit is a personal one for him, as his wife suffers from Ankylosing Spondylitis. In his spirit of giving, Lazlo will be giving a ton of his time and all donations to the Spondylitis Association of America.

How do you donate?
Throughout the webathon there will be a link on blowupradio.com to donate to the SAA.

What do you get for donating?
Besides the release of positive endorphins from donating to a worthy cause? Everyone who donates will receive a compilation album to download. It includes special tracks from artists performing during the webathon. I’m adding a live performance of my song “A New Start” to this compilation. It will not be available anywhere else. The recording was captured this past year at Espresso Joe’s coffee house during one of Lazlo’s Guitar Pull events.

How do you learn more?
The official press release and schedule of performances is here: http://blowupradio.tripod.com/newsletters/2015/spondypr.html

What else do you need to know?
More posts about this will be forthcoming. In the meantime, feel free to stream and download my performances from the three previous years.